McLaren Automotive is delighted to partner with AXA Sydney Harbour Concours d’Elegance in 2021 to celebrate the arrival of the new McLaren Elva Gulf Theme by MSO, debuting for the first time in Australia. 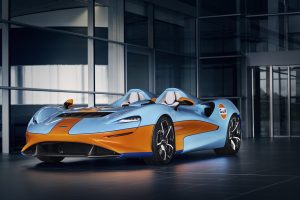 McLaren Elva Gulf Theme by MSO is a celebration of the renewed relationship between McLaren and the Gulf Oil brand and another example of how designs from McLaren’s racing history are inspiring the brand’s modern-day customers. McLaren and Gulf have a historic union that originated in the 1960s, a decade when both companies made their first forays into motorsport. Gulf branding appeared on McLaren’s Can-Am, Formula 1 and Indy cars from 1968 to 1973, and two decades later McLaren F1 GTRs run by customer team GTC carried the famous Gulf livery in global GT racing, including at Le Mans.

The marque is delighted that its unique McLaren roadster in blue and orange Gulf colours will now be captivating attendees at the upcoming Concours d’Elegance. 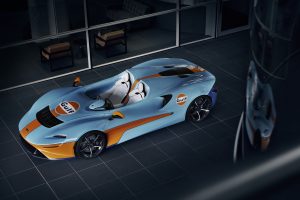 “The McLaren Elva Gulf Theme by MSO is a striking celebration of both McLaren’s history in sports car racing and our new partnership with Gulf Oil. At McLaren, we are committed to pushing the boundaries of what is possible and to showcase the increasingly extensive range of performance capabilities and personalisation options we can offer to customers. The McLaren Elva Gulf Theme embodies the racing heritage which we have inherited by our founder Bruce McLaren. He was a racer, an innovator and a true leader, his pioneering spirit lives on through the work we strive to accomplished at McLaren each day in his honour,” said George Biggs, Managing Director, McLaren Automotive, Asia Pacific and China.

In addition to the McLaren Elva, the model will be joined by the marque’s everyday supercar, the McLaren GT, as well as the most powerful and engaging McLaren Longtail yet, the 765LT, on display in Australia for the first time.

2021 is the third year of the Sydney Harbour Concours d’Elegance and McLaren is delighted to be partnering with this prestigious event. Once again set among the lush gardens of Swifts, one of Australia’s finest mansions, built in 1875, the event provides the ideal setting to showcase the finest examples of automotive mastery, including this exciting Ultimate Series model. 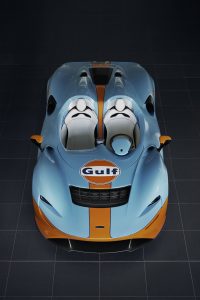